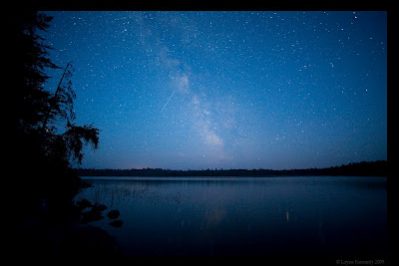 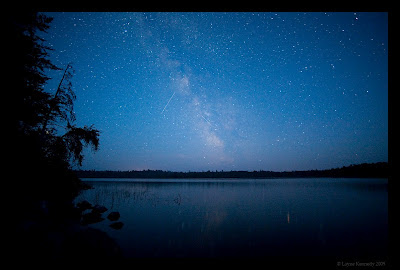 Plan your next Boundary Waters canoe trip for the best chance of seeing shooting stars! You’ll escape light pollution and find the Boundary Waters is a great location to view meteor showers. Imagine lying on your back after a day of paddling and seeing shooting stars all around you! Here are the dates and descriptions for some of the major meteor showers of the 2012 paddling season.

May 5-6, 2012  Eta Aquarids
If you’re planning an early trip to the Boundary Waters this season, try staying up late or waking up early to catch these shooting stars. Look toward the southeastern part of the sky at about 4 a.m. until just before dawn and see if you can spot the brightest stars in May!
Moonrise: 8:23p.m.  Moonset: 5:07a.m.
Sunset: 8:25p.m.  Sunrise: 5:42a.m.

July 28-29, 2012  Delta Aquarids:
Look for shooting stars between moonset and dawn for this meteor shower. In the Boundary Waters, you may see 15-20 meteors per hour in the southern part of the sky. Typically, your best bet at catching these shooting stars is approximately 2 hours before dawn.
Moonrise: 4:57p.m. Moonset: 12:57a.m.
Sunset: 8:49p.m.  Sunrise: 5:39a.m.

August 12-13, 2012  Perseids:
This is the big one!  It is expected by many to be the best meteor shower of the season.  In the dark sky, these meteors can peak at over 50 each hour. These meteors are often bright and leave persistent trains. Look for them late into the night and into the early hours of the morning.  Photographer Layne Kennedy joined us for several cloud-free nights in the BWCA during the Perseids.  In the above image taken on Lake Agnes, he captured not one, but TWO shooting stars in the same exposure. Look closely. Both shooting starts are in front of the lighter-colored Milky Way.  During this dramatic celestial display, we laid on our backs for hours on a rock point, repeatedly exclaiming, “there’s one.”  We spotted as many as a half dozen in a single minute.
Moonrise: 1:04a.m. Moonset: 5:00p.m.
Sunset: 8:26p.m.  Sunrise: 6:00a.m.

At Ely Outfitting Company and Boundary Waters Guide Service, our goal is to provide you the best information and outfitting for your successful Boundary Waters canoe trip.  Best of luck with your star gazing!