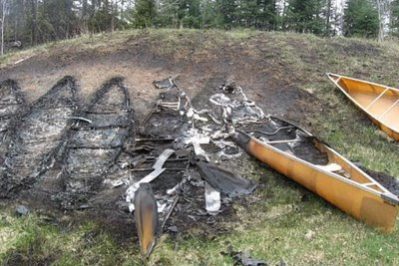 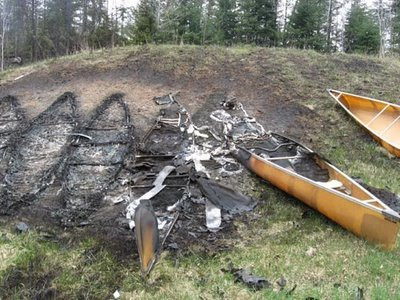 Living in the North Woods means we are well aware of forest fire dangers. We are particularly conscientious about putting out our campfires. We know, in some cases first hand, about the devastating effects of forest fires caused by improperly extinguished campfires.

Case in point. When I started guiding Boundary Waters trips in the mid-nineties I would sometimes camp on Ham Lake. A forest fire has since dramatically changed that lake.

In May 2007, a camper on Ham Lake, just on the edge of the Boundary Waters along the Gunflint Trail, apparently failed to fully extinguish his campfire. The result: the largest forest fire in the region in at least a century. Referred to as the “Ham Lake Fire,” it burned more than 75,000 acres, nearly 150 structures, and the above canoes. It also temporarily closed several Boundary Waters entry points. Although the fire did not directly impact our Ely area entry points, we empathize with our friends northeast of Ely who are still rebuilding.

The U.S. attorney’s office indicted a Washington, DC, man for starting the wildfire. The case is pending. The government claims the defendant started a fire at a campsite, did not fully extinguish it, and then lied about it. The accused reportedly visited the Boundary Waters annually, and inadvertently started the wildfire. The Associated Press first reported late last night that the defendant has committed suicide.