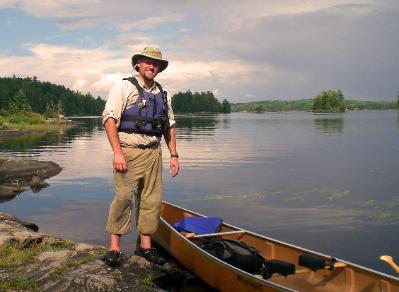 Jason fell in love with the North Woods when he began guiding Boundary Waters wilderness canoe trips in the summer of 1997. He got his start guiding high school youth groups. During that first season, he developed a reputation for charging back into the Wilderness on his days off.

Jason’s love for the Boundary Waters is obvious and contagious! He’s happy to share his knowledge of the local flora and fauna, as well as the natural and cultural history of the region. 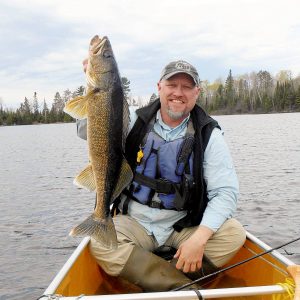 He also likes to fish. Prepare yourself for the fast action of smallmouth bass, thrill of big pike, and fun of a marble-eyed walleye. You’ve never experienced fresh fish like the out-of-the-lake and into-the-frying-pan ultimate fish fry of a Boundary Waters canoe trip.

Jason once bet a friend he could outfish him with nothing but a stick and a length of fishing line – or the loser would eat his hat. The wise friend refused the hat-eating part, and it’s a good thing for him. Jason boated 5 walleye before his friend caught a single one.

When the lakes freeze over, you’ll find Jason outdoors as well. He has a decade’s worth of experience guiding dogsledding trips in and around the Boundary Waters with Wintergreen Dogsled Lodge. In addition to the North Woods, dogsledding has taken him to the Rocky Mountains, Hudson Bay and the high Arctic. 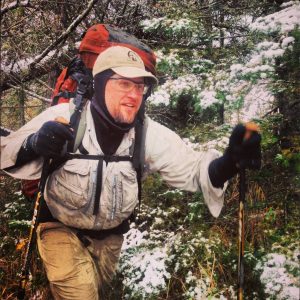 In Oct. 2013, Jason spent 15 days alone exploring the most remote parts of the Quetico and BWCAW without a boat – bushwhacking the dense forests and swimming (with a drysuit) when necessary. The route spanned 90 miles bisecting the heart of Quetico and the BWCAW from north to south. The solo journey was described as “either half-baked or brilliant,” and went viral online and in the media as followers wagered on his likelihood of success. In the end, he became “by all accounts, the first person to have made such a crossing.” The following winter, he crossed the frozen lakes and snow-covered wilderness of Quetico and the BWCAW with snowshoes and pulling a sled. The treks left him with a better understanding of the moods and spirit of this extraordinarily special place.

Jason frequently provides commentary on the BWCAW to media, and serves on the board of the Campaign to Save the Boundary Waters. In Feb. 2020, he testified before a US House of Rep. Natural Resources subcommittee about the national importance of the BWCAW and the threat of sulfide ore copper mining proposals within its watershed.

Jason received unexpected fame as the namesake of a 2020 bestselling romantic comedy novel The Happy Every After Playlist starring Jason from Ely Outfitting Company as the protagonist. He was referred to as a “younger, hipper Grizzly Adams” in the Washington Post Magazine. And he is a featured guide on the PBS special, Best Adventure Lodges of North America.

Jason grew up on an Iowa family farm. He graduated Phi Beta Kappa from Luther College in Decorah, Iowa, and with distinction from the Univ. of Iowa College of Law. In his spare time, Jason likes to build things. He really enjoys sharing the North Woods with people.