Lily the Black Bear is Giving Birth – See the Live “Black Bear Cam” in her Den near Ely, MN 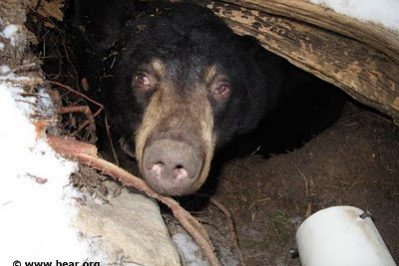 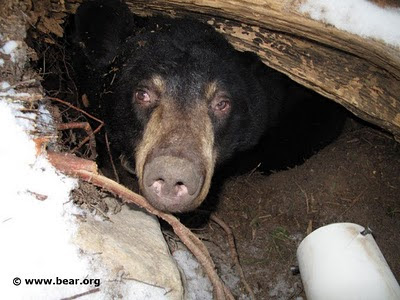 The first ever live broadcast of the birth of a wild black bear cub is being broadcast on the web. The North American Bear Center (http://www.bear.org/) near Ely has placed a special live camera in Lily the Black Bear’s den to record this event. Click here for the Black Bear Cam.

I just got off the phone with Dr. Lynn Rogers of the Bear Center. He confirmed that it appears Lily the Black Back has just given birth to a black bear cub. She may have also given birth to a second cub, or a second cub may still be on the way. Lily went into labor yesterday at 1:59PM. Lily then made some contortions and gave birth to a first cub at approximately 11:38 AM today. The squawks of the cub and sweet grunts of the mother bear were heard shortly thereafter, says Dr. Rogers.
Dr. Rogers is probably the foremost black bear researcher in the world and says this is the first time in his 43 years of bear research that such a birthing event has been captured in the wild. It is only possible because reseachers worked with Lily in the wild for several years to develop her trust. Without her trust, Lily would have abandoned her den when the video equipment was installed.
The above photo shows Lily the Black Bear looking out of her den on January 11, 2010. The below photo shows her den and the camera equipment.
Dr. Rogers also communicated a request that bear hunters not shoot collared bears, such as Lily, that are the subject of their research.
Photos used with permission. Please note that Boundary Waters Guide Service (www.BoundaryWatersGuideService.com) provides fully outfitted and guided Boundary Waters canoe trips for friends and families, and does not guide bear hunting trips. 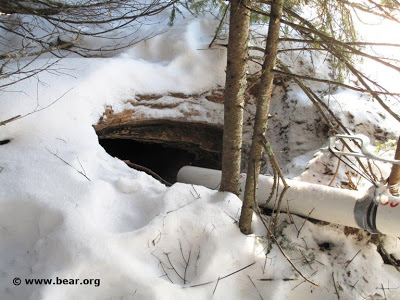