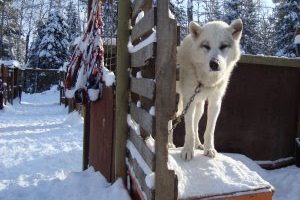 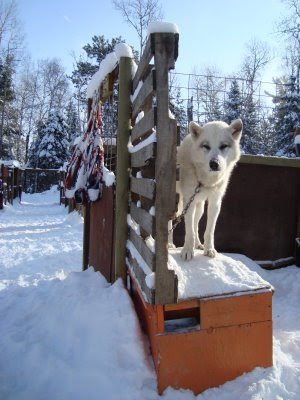 Buster (above) is a lucky dog.

His doghouse is near the main entrance to the kennel. That means he gets extra petting from guests.

He’s one of my favorites because he is ultra-consistant and reliable. That means I give him some extra attention.

But, he’s really lucky to just be alive. He was born a cute white puppy in Greenland. However, cute white pupplies don’t have a long life expectancy in parts of Greenland. The reason is tied to a proud tradition of Inuit (or “Eskimo”) hunters, and Arctic customs.

The Inuit men proudly wear polar bear chaps during their dogsled hunting journeys to kill seal and polar bear. When an Inuit family bears a son, it is tradition for the infant boy to be given similar “polar bear” chaps. However, actual polar bear fur is too coarse and abbrasive on an infant’s tender skin. In contrast, the soft fur of a cute white puppy works just right.

Fortunately, an Inuit family gifted Buster to Paul Schurke, the owner of Wintergreen Dog Sled Lodge, during one of his Greenlandic expeditions. Now Buster lives in northern Minnesota – far, far away from his birth place. He lives one of the best lives a sled dog could ask for: Pulling sleds through the snow, working with other dogs in a team, and pleasing the people who come to experience the thrill of dogsledding.