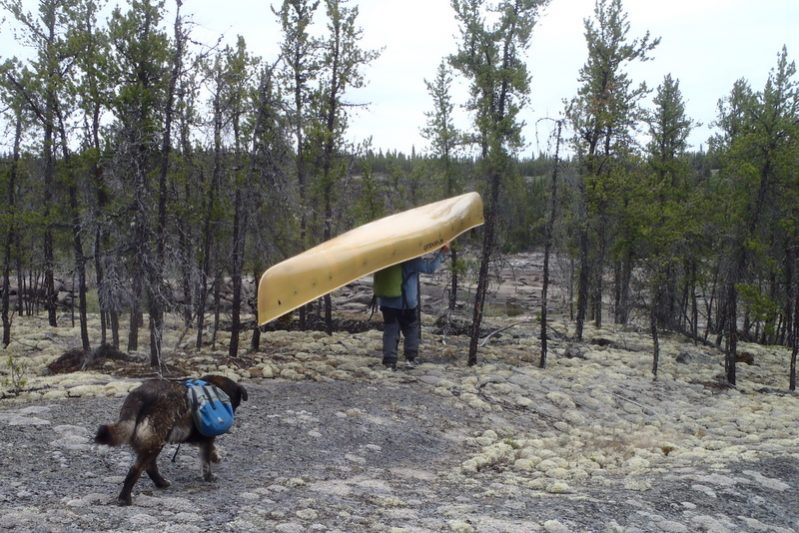 Dave and Amy Freeman, their friend Bryan Hansel, and their dog Fennel
hiked down the Grand Portage to Lake Superior yesterday, completing
their 2,300 mile paddle from Fort Resolution, Northwest Territories to
Grand Portage, Minnesota. This marks the end of the fourth stage of Dave
and Amy’s North American Odyssey, an 11,700 mile expedition by canoe,
kayak, and dogsled.

The end of their route has taken them through Voyageurs National Park
and the Boundary Waters Canoe Area Wilderness, and Dave and Amy are
thrilled to be back home near Grand Marais as they wrap up this 5-month
leg of their journey. Bryan Hansel joined them at Crane Lake for the
final 240 mile stretch.

This stage of the North American Odyssey
began in the last week of May while ice still covered most of Great
Slave Lake. Dave and Amy worked their way up the remote Taltson and
Tazin Rivers in the spring. The clear, cold waters of Lake Athabasca and
Reindeer Lake were also on their route, along with the algae-filled
waters of Lake Winnipeg. They saw plenty of moose, black bears, loons,
tundra swans, and even a couple of woodland caribou.

The purpose of the North American Odyssey is to raise awareness of North
America’s waterways and wilderness. It is also a call to action, urging
people to simplify their lives, reduce their carbon footprints, and get
outside to enjoy nature. Their message has been heard by about 65,000
school children from around the globe so far.

Dave and Amy update an educational website, www.WildernessClassroom.com,
where students and educators interact with the expedition team. A
second website, www.NorthAmericanOdyssey.com serves as a blog for
armchair adventurers to see what they are up to.

The Freemans began the North American Odyssey in the spring of 2010 near Seattle, Washington. They paddled the Inside Passage and then headed inland, working their way up to the Mackenzie River delta. They then turned south and paddled upstream until the snow flew and spent last winter dogsledding across the North West Territories to Fort Resolution.

Despite this homecoming after about five months of paddling, the couple are just over halfway done with the North American Odyssey. They are taking this winter break to give school presentations and attend other speaking engagements. They will be guiding dogsled trips over in Ely, too. In the spring, they will dust off their paddles once again and travel through the Great Lakes out to the East Coast, where they plan to follow the annual whale migration down the Atlantic Coast to the Florida Keys.

Everyone is invited to their pizza bake and slide show at North House on October 27th in Grand Marais. The pizza bake starts at 5 pm, followed by the slide show at 6:30. The Wilderness Classroom will provide the dough, cheese, and sauce. Bring your favorite toppings and invite your friends. All are welcome!