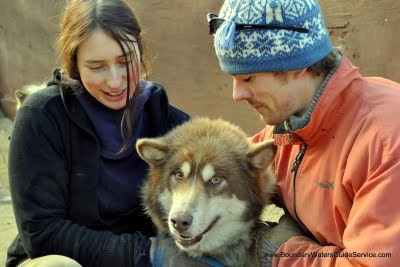 Note: This is part one in a series about Chris and Lisa’s Northwest Passage Dogsled Expedition.

Chris Maher, of Ely, and Lisa Strom, from Sweden, are making final preparations for an epic dogsled expedition of the Northwest Passage – from Inuvik (near the north end of the Northwest Territories of Canada) to Churchill, Manitoba.

This week, they will leave for Inuvik. It is a 3,200 mile drive pulling a dog trailer with twelve dogs. Once in Inuvik, they will train dogs and take care of last minute preparations for a few weeks.

On January 1, they will begin dogsledding eastward. They have budgeted for up to 150 days of dogsledding, and hope to pull into Churchill by the first of May.

Today I helped them load 880 pounds of dog kibble and 500 pounds of lard. That’s only enough for the first leg of their journey. They have already shipped dog food resupplies to native villages along the northern coast of Canada.

This photo shows Chris and Lisa in the Wintergreen Dogsled Lodge kennel with Frank “the Tank.” Frank is one of the polar huskies they will rely on to travel across the arctic.

Additional blog entries will cover what makes this expedition unique, deep Ely connections to the trip, and how they get their car back from Inuvik.