Painting with light in a Layne Kennedy photo workshop 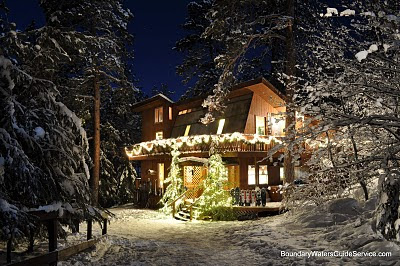 Layne Kennedy is at Wintergreen Dogsled Lodge this week leading a dogsledding photo workshop. I’m one of the dogsled guides on the trip. It is a joy to work with Layne and absorb his contagious enthusiasm.

Layne is a professional magazine and nature photographer. At the beginning of the photo workshop week, participants draw “assignments” out of a hat and use them to help focus their lens’ attention. I drew “the lodge.”
Layne taught about painting with light this week. It’s a new concept to me. I’m getting to know my Nikon D5000 digital SLR and experimented with leaving the shutter open on a 30 second exposure. The below photo shows an uninspiring photo of the lodge on a 30 second exposure at f/14.0. The above photo, in stark contrast, shows the lodge moments later taken on a 30 second exposure (but at f/9.0) with some “light painting.” While the shutter was open, Layne shined a handheld spotlight on parts of the lodge and trees to bring them to light. It is an exciting technique that created a more pleasant result than one could get altering the picture with Photoshop. None of the photos in this post have been altered in Photoshop. 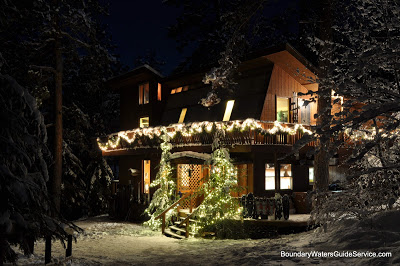 Finally, the photo with the yurt also demonstrates painting with light on a long exposure. I took this one on a 20 second exposure. The red color in the snow is from the headlamp Layne is wearing in the shot.
Layne will be leading a Boundary Waters photo workshop canoe trip with Boundary Waters Guide Service this September. Click here for more information. Also watch for Layne’s latest book on the Boundary Waters to be published by the Minnesota Historical Society Press and released in 2010. 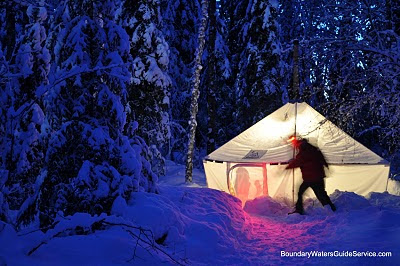