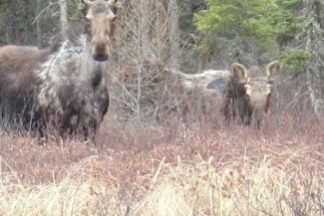 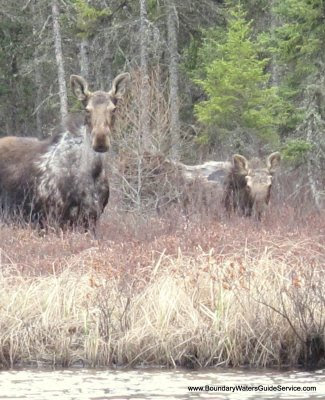 I photographed this cow moose and her calf today while paddling near Lake Four in the BWCA. As I paddled past a narrow inlet, I glimpsed what looked like an upturned tree root. I twice backpaddled against the wind to get a better look, then used my camera zoom to confirm they were moose.
As I approached, I noticed the odd-looking white on their shoulders. When I returned home, I called Tom Rusch, the DNR area wildlife manager in Tower, to ask about the white areas. He immediately recognized the issue. He says that, since about January, these moose have probably been vigorously rubbing against trees to scratch off some of the thousands of winter ticks latched onto them. The scratching tears away patches of the moose’s coat and shows their white undercoat and skin.
These ticks aren’t the wood ticks found on the family dog, but instead unique moose ticks that grow as large as your pinky fingernail. The ticks stress the moose and are linked to increased moose mortality, and our dwindling moose numbers. Rusch says moose ticks drop off in the spring. If they drop on snow they die. If they drop on grass they reproduce. Shorter winters may be contributing to an increase in these ticks because they drop on grass unveiled earlier by warmer springs.
About three-fourths of area moose show rubbing indicators like this now, says Rusch. However, the white patches won’t last through summer. The moose are just starting to blow their coats, and their lighter summer coats will grow through and give them the stereotypical dark brown coat. I hope to get some photos of a healthy-looking bull this fall.
May 6, 2009
Search Our Site
Go to Top