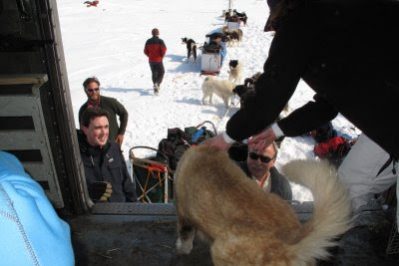 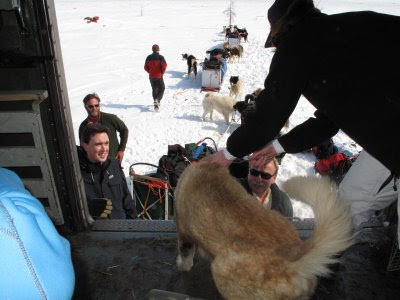 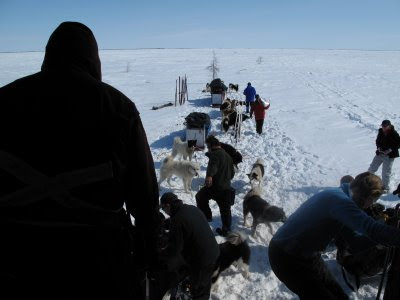 We’ve received several varying reports from the conductor regarding the arrival time for our drop off point. Originally we heard mid-morning. It kept getting pushed back due to the rough track conditions.

At 1PM, the train screeched to a halt, the freight door slid open, and we started on assembly line unboarding. The train staff took quite an interest in us. All three of them gathered in the box car to admire our jovial scene. The conducted snapped photos, looked at me with a smile and said, “I may never see this again.”

We waved goodbye to the train and watched it bounce away down the tracks. The group quickly harnessed dogs, hitched them to the sleds, and finally launched our dog teams across the frozen tundra.

We are fortunate our trail conditions are relatively firm with wind-packed snow. The sky is blue, the Arctic sun is shining, the temp is about 32F and the winds are calm. This region is known for high winds, and a ground blizzard swept through last week. We feel fortunate for our current ideal conditions.

One building exists between where we launched and Hudson Bay. Is is called Watchee Lodge. We dogsledded six miles to the lodge and took a lunch break. During February and March, photographers and tourists flock to Watchee Lodge. They are here to see mother polar bears emerge from their earthen dens with polar bear cubs in tow.

We dogsledded a few hours after Watchee Lodge and camped on Fletcher Lake. The moon is bright, but we still see white-colored northern lights fade in and out across the lake.