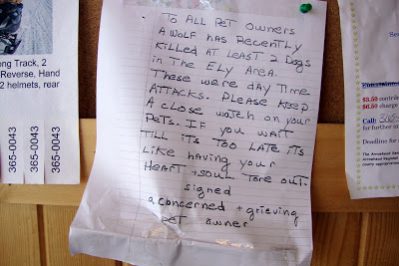 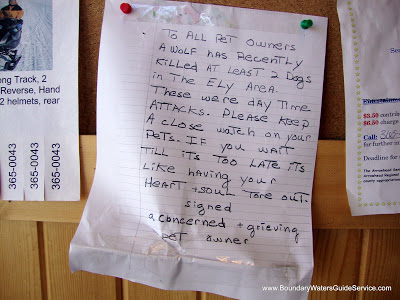 Wolves are generally not dangerous to people, and I’m unaware of any human injuries related to wolves in the BWCAW. Instead, if we see wolves on a Boundary Waters canoe trip, we feel especially lucky and pleased.

The same can’t be said for domestic dogs and their interactions with area wolves. Wolves are probably one of the greatest threats to my aging chocolate lab. My neighbor’s dog was killed by wolves, and wolf attacks on domestic dogs are relatively common in the area. Many folks near Ely know people who’ve lost dogs to wolf attacks. And there are some fairly incredible stories of leashed dogs being attacked as well.

Unfortunately, more wolf attacks on dogs have apparently happened recently. This sign appeared at Ely grocery stores and at the hardware store this week.

The wolves near town seem to be getting less afraid of the residential areas. Earlier in the summer a resident photographed a wolf that repeatedly raided trash bags at an in-town apartment complex.

Also, one of the packs may be hanging around near town. Three wolves were spotted on the Old Airport Road in daylight recently, and I saw one cross Highway 1 just at the city limits in daylight today.