Bubba – Pulling Harder Than Any Other Dog 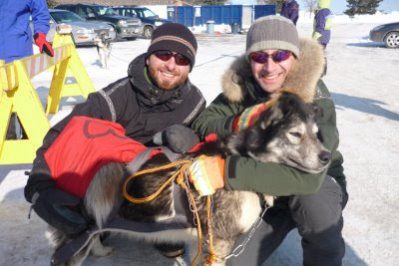 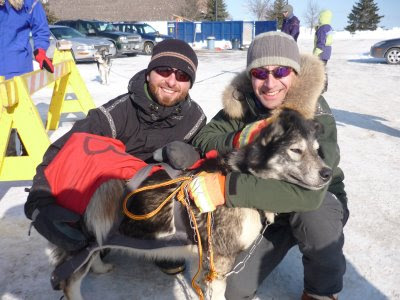 GUEST BLOGGER: Wilderness Guide Kate Ford.
The second annual Ely Wolftrack Classic sled dog race is happening this weekend, so Ely is buzzing with visitors. Tomorrow our friend Eva Kolodji will take her dogs out for the 30-mile race from Ely to Tower, which she estimates will take about 3.5 hours. That’s much less than the Beargrease she competed in a month ago, so we hope it will feel like a walk in the park! Good luck to her!
In addition to the speed race, this year the organizers have a new competition included as part of the Wolftrack Classic: a weight-pull. One dog must pull a 390-lb wheeled cart about 20 feet, with 2 cinder blocks added every round. Wintergreen decided to enter one dog into the amateur division (there is, in fact, a professional circuit of weight-pulling dogs). Bubba, as his name might suggest, is one of our strongest and most hard-working dogs in the kennel. Toby and Max, from the Wintergreen crew, took on the task of being Bubba’s handlers. The above photo shows them with Bubba. And, yes, Bubba is wearing a red cape, like any self respecting super-dog.
The first round, Bubba couldn’t quite get past the new smells and odd sites around him. He stepped off the special pulling carpet several times (each time resulting in a 10 second penalty), and marked his territory on the wheel (another 10 second penalty – though it did get a good laugh from those watching). One of the unusual elements of this for Bubba was to get the sled moving by himself. We always ask our dog sled participants to give the sled a little shove, as the dogs feel the slack and will then pull forward. Bubba jumped in his harness, but when the sled hadn’t moved right away, he stopped pulling. After a few false starts, he got the hang of it and pulled the cart to the end of the carpet without appearing even to try.
We watched as 2, 4, 6 and more cinder blocks continued to be added to the cart. Each handler can provide any kind of encouragement without touching the dog. Handlers had different methods to encourage their dogs, including running next to their dogs, throwing a toy in front, having their kids pull in front. Toby just said “hike!” while standing in front of Bubba, and moving forward.
The competition topped out at 14 cinder blocks totalling over one thousand pounds. Bubba made it to the last round. He put his whole body into it by the last two rounds, with his back hunched and nose down.
Bubba pulled hard today, harder than any other dog as it turns out. Even with his first-round time penalties, he took first place! Our participants occasionally inquire if the dogs are strong enough to pull all their weight, and the answer from Bubba is a clear yes: his last round, he pulled 1,006 lbs.
March 1, 2009
Search Our Site
Go to Top