Dragonflies Emerging From Fourtown Lake in the BWCAW 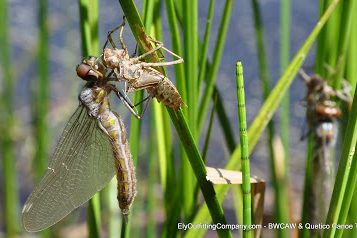 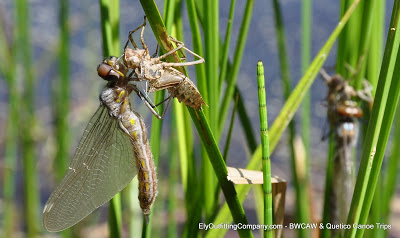 One of the great things about late spring and early summer in the Boundary Waters is the overwhelming sign of new life.  It seems everywhere you look there are birds on nests or with young in tow, flowers cover the forest floor, and insects such as these dragonflies are emerging to a new life of flight.
We spotted a mass of hundreds of these dragonflies at the north end of Fourtown Lake in and around the reeds where the stream flows into the main lake.  These dragonflies spent possibly several years underwater in a nymph stage.  Then they crawled out of the water to a vertical surface – reads and blades of grass here.  Although they are difficult to positively ID at this stage, this dragonfly may be a member of the Baskettails genus that are known for mass emergences, a brown abdomen, and yellowish spots on their sides.  The below photo shows one of them back lit in the reads. 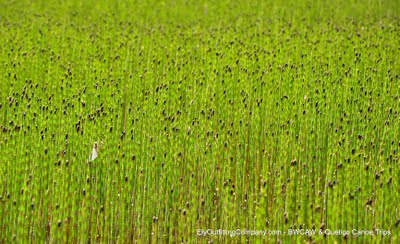 The larval case that the above dragonfly is clinging to contained all of the much larger adult dragonfly body and wings earlier in the day.  It emerged from a break in the skin at the back of the head of the larval case, then pulled itself out, pumped blood into its wings to expand them, and waited for its wings to dry and its body to complete the metamorphosis.
Although this dragonfly didn’t take flight during our lunch stop, we watched a similar dragonfly emerge in our earlier campsite on Lake Agnes, and luckily caught a glimpse of its first flight.  The flight pattern looked erratic and dizzyingly loop-d-loop for the first twenty feet, and then it seemed to get the feel of flying and buzzed back into the woods.
After dragonflies take flight, the empty larval shell, such as the one below, clings to the plant, rock or occasional camp utensil bag until the wind or rain knocks them loose. 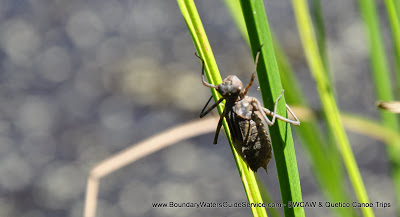