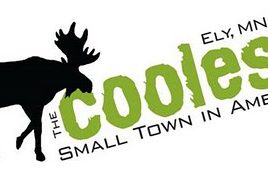 Ely, MINN – National travel magazine Arthur Frommer’s Budget Travel has named Ely, Minn. as its 2010 “Coolest Small Town in America.” The magazine received 147 nominations, then selected 21 American towns that stood out from the crowd to open up to public online voting. In online voting, 439,411 votes were received, and Ely captured 118,899 of those—27 percent of all votes.
A feature on the city of Ely will be included in the magazine’s September 2010 issue.
Ely is located in the Boundary Waters region, on the US-Canada border between Ontario and Minnesota, and is a popular destination for campers, as well as canoe and fishing enthusiasts, and those looking for natural scenery and relaxation.
The magazine defined what they sought for ‘Coolest Small Town’ as a town with a population under 10,000. According to the original solicitation for nominations, the magazine wrote, “we’re talking small towns, not big cities. It’s also got to be on the upswing, a place that’s beginning to draw attention—and new residents—because of the quality of life, arts and restaurant scene, or proximity to nature. And cool doesn’t mean quaint. We want towns with an edge, so think avant-garde galleries, not country stores.” The runner-up cities were Cloverdale, Calif. and Brevard, N.C.
See the original competition details here: http://www.budgettravel.com/bt-srv/coolestsmalltowns/CST2010.html.
“People have long recognized that Ely’s a town full of eccentric people and interesting cultural offerings, but also a land of beautiful wilderness,” says Linda Fryer, director, Ely Chamber of Commerce. “We may be at the end of the road, but once you get here, there’s a lot to see and do.”
The magazine summarized Ely in an introductory article in January: “Also called the End of the Road, Ely sits in Minnesota’s scenic extreme north, where it once served as an iron-mining hub. But Ely has come a long way since her unglamorous mining days, now playing host to a number of renowned wilderness facilities like the International Wolf Center and the North American Bear Center. The city is a perfect base for camping, canoeing, and fishing, as the nearby Boundary Waters Canoe Area Wilderness offers an untouched expanse of lakes and bogs straddling the U.S.-Canadian border. Ely has become notorious for the annual April Fools’ jokes that city leaders play on the eager-to-be-fooled citizens. In 2008, a press release announced that Ely was being sold to Canada to boost tourism. The mayor commented on the subject in a local newspaper, and cheeky ‘Say No to Canada’ signs were displayed along the highway. The following year, Ely began a mock-campaign to secure the right to host the 2016 Olympic Games.”
In 2010, Ely once again engaged in April Foolery with an announcement on April First that it, in conjunction with the Forest Service, had signed a multi-year deal with a nationally known corporation  for naming rights to the legendary Boundary Waters Canoe Area Wilderness (BWCAW).
Arthur Frommer’s Budget Travel magazine is published monthly except for combined issues in December/January and July/August by Intellitravel Media, Inc. BudgetTravel.com is the website for Budget Travel magazine, which receives approximately 1.8 million unique page views per month.
For more information on Ely, Minn., and to book a Boundary Waters canoe trip vacation that’s less than four hours from the Twin Cities, please visit www.BorderLakesOutfitting or call 218-343-7951.
June 13, 2010
Search Our Site
Go to Top