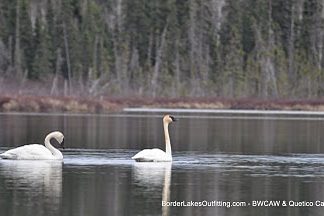 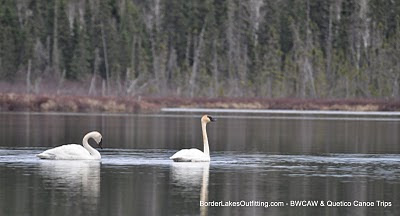 It’s almost never possible to do a Boundary Waters canoe trip in March. But, with our early spring, and summer-like temps, I eagerly watched the forecast in hopes of just such a March trip. Sure enough, the rivers freed up from ice quickly and even some of the lakes were going out by the end of the month. 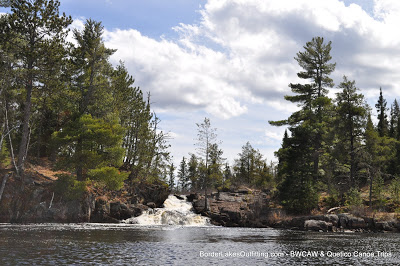 As I paddled toward Bootleg, my curiosity about whether it would be open or locked in ice yet grew. Fortunately, the typically low (and sometimes virtually impassable) Little Pony River had adequate water, and I portaged into Bootleg at about 6 PM. A stroke of luck meant the lake had opened up and was virtually ice-free except for some candle ice that collected near the portage. Lexee-dog seemed intrigued by the sound of the ice chinkling against my paddle and the canoe. 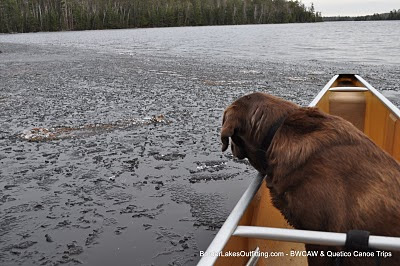 What a remarkable trip. With two days of t-shirt weather I observed a bonanza of wildlife celebrating the advent of spring. I saw all sorts of firsts for the 2010 ice-out season: beavers slapping their tails, muskrats, minnows, a leech, mosquitoes (two!), a fish jumping, mallards, a herring gull, Canada geese flying north, maybe an osprey in the distance, and some other ducks.

But the wildlife highlight of the trip occurred within about a mile of the takeout. As I rounded a bend, I spied two trumpeter swans leisurely preening themselves on the river. They let me relax and watch them swim gracefully for about twenty minutes. I used up the last of my camera battery life before they decided to fly off.

The swans’ final act delighted me. I’ve never seen other birds do this, but I’ve seen it with trumpeter swans here before. They took flight going away from me, flew for a distance, then u-turned and flew back toward my canoe. They then did a fly-by directly overhead, not far above, with the sound of rushing air crossing their six feet wingspan. As I watched, they seemed to tilt their wings in a “welcome to our woods, happy to share” sort of message. The experience felt like the true launch of the paddling season. 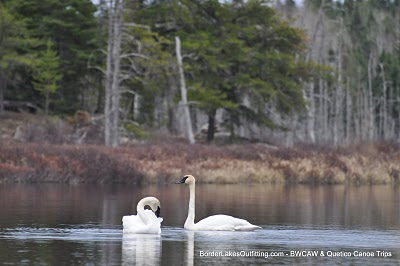 I basked in the good feelings of watching such remarkable birds – creatures so pure and clean and white and ornate it seems they belong in my grandmother’s china hutch. The experience will be a highlight of my year.

So pleased with the encounter, I decided against replacing my camera battery for the rest of the short paddle to the take-out. Then I rounded another bend and spied a moose grazing along the shore. That image will just remain in my head.