Pine Marten on the Hunt 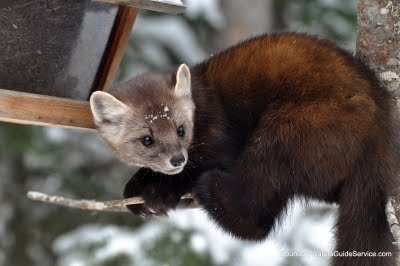 This frisky Pine Marten is hanging around the cabin, eating birdseed from the feeders and chasing wildlife. I photographed him today.

Recently I watched him chase a Red Squirrel up a spruce tree, and then give up on the chase to await an easier ambush. Then I spotted him bounding through the fresh snow after a Snowshoe Hare. It didn’t look like he had a good chance at running the rabbit down either.

But, the local critters know the Pine Marten is on the hunt. The squirrels are being particularly cautious around the bird feeders. They are staying in the trees, hopping from branch to branch rather than moving through the snow where they’d be easier prey.

Pine Marten are typically chocolate-brown, have a golden throat patch, and a 12 to 18 inch body followed by a seven to ten inch tail. They are smaller than the related fisher (30-47 inches long, including tail). As omnivores, they subsist on Red-backed Voles, squirrels, rabbits, mice, chipmunks, birds, insects, seeds, worms, and berries. They reportedly particularly like raspberries. Pine Marten are excellent climbers, freely jump between trees, and can rotate their back hips to run headfirst down a tree trunk.

They are active all year. In winter, you may see their paw prints in the snow. Their tracks are less than two inches wide and show five toe pads around a rounded heel pad.

The Pine Marten stick to high ground and loathe water that mats their unoiled fur. In summer, you may seem them on portages. However, the brown cat-size creature dancing along the shoreline rocks is more likely to be its water-loving relative with a contrasting white throat patch, the Mink. 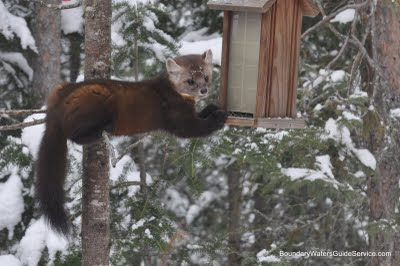