Sulfide Mining on the Edge of the BWCAW 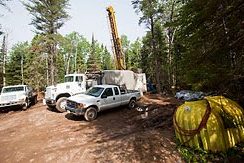 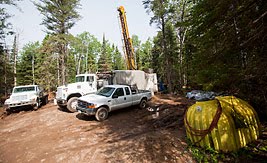 Border Lakes Outfitting and Jason Zabokrtsky teamed with the Friends of the Boundary Waters recently to raise awareness for the potential environmental impacts of proposed sulfide mining operations on the edge of the Boundary Waters.  Jason guided the group of environmental advocates and media representatives, including Stephanie Hemphill of Minnesota Public Radio and John Myers of the Duluth News Tribune.

See the Duluth News Tribune Article here.  Listen to the MPR story here, or see the full text below.

Ely, Minn. — Six mining companies are doing exploration work that could lead to mines near the Boundary Waters Canoe Area Wilderness, and that’s got a lot of people concerned.

Steve Koschak looks at a drill site near his River Point Resort on the South Kawishiwi River just east of Ely, Minn.

A contractor for Ely-based Duluth Metals is drilling a six-inch hole, about 3,000 feet into the earth. A trickle of water runs to a pit a few feet away. The pit holds water and a scum of gray muck, finely ground rock from deep in the earth.

“If you were to analyze all that, there’s probably copper-nickel in that. But look what it’s going into, it’s going into the swamp,” he says. “That’s all this is, is a network of spruce swamps, all interconnected, this all goes into Birch Lake, all this water.”

When the drilling is done, workers will bury the muck on site, a state requirement. The trouble is, around here there are so many wetlands, it would seem impossible to keep the muck out of the water system. Duluth Metals officials say there won’t be enough mineral waste here to be any cause for concern.

This drilling is a precursor to what could be a deep shaft mine, more than half-mile below the surface of the earth. A mine would produce tons and tons of ground-up waste rock.

And this is sulfide rock. When it’s brought to the surface, a chemical reaction occurs that produces sulfuric acid. If the rock is not carefully isolated from air and water, it can acidify nearby streams and wetlands — possibly enough to poison the life in the water.

In many mines, discharges also contain traces of heavy metals such as lead, arsenic and manganese. The problem is called acid mine drainage, and it’s happened wherever copper mines have been drilled.

We pass turtles sunning themselves on rocks, and a pair of mergansers keeping a close eye on their young brood.

“This is where all the mining exploration’s going on, just to the east of the river,” says our guide, Jason Zabokrtsky. He points out that the drilling is going on about three miles south of the edge of the Boundary Waters. But here the river turns north and then flows into the heart of the wilderness.

“Into Fall Lake, then into Newton and Basswood Lake, across to upper and lower Basswood Falls, into Crooked Lake, into Iron Lake, across Curtain Falls, and into Lac la Croix,” he says. “All really well-known Boundary Waters lakes.”

Some people who live near the potential mining sites are worried. Bob Tammen, who lives in Soudan, about 20 miles from Ely, and has vacation property on the South Kawishiwi River, says he doesn’t trust the state to protect the environment. The state, he said, hasn’t been able to completely clean up pollution from the Dunka pit, a waste site from a taconite operation that accidentally exposed sulfide rock 50 years ago, and ever since has been leaching metals into a nearby creek.

The Minnesota Pollution Control Agency’s Ann Foss says it’s difficult to solve an unexpected problem, but the experience at Dunka has taught the agency a lot about how sulfide rock reacts when exposed to air and water. She says that experience will help inform environmental reviews of any sulfide mining proposals.

The Friends of the Boundary Waters has backed legislation at the state level to beef up requirements on financial assurance — similar to the escrow fund that BP has agreed to set aside for the ongoing oil spill in the Gulf of Mexico. Last year, the Minnesota measure died in committee.

Some of the neighbors here, around the edge of the Boundary Waters want to go further: they want the state to prohibit sulfide mining unless a company can point to one place in the world where a mine has operated without polluting water. Since a similar law passed in Wisconsin, no mines have been built in the state.

The exploration is happening on the southwest edge of the Boundary Waters. Fifteen miles to the west is the town of Ely.

There are varying opinions in Ely on the exploration and possible mine development. The area has long been dependent on jobs in mining, logging, and tourism. Some people are excited about a new source of good-paying jobs. They still remember when the underground mine in Soudan used to ship tons of rich, iron ore. It closed in 1962 and now is a state park.

Duluth Metals has an office in Ely, in a house on a quiet street. The walls are covered with colorful geologic maps, and in an attached garage there are lots of core samples from those drill sites down the road.
David Oliver, the project’s manager, is very excited about the minerals that lie more than a half-mile beneath the surface, on 1,500 acres near the South Kawishiwi River.

“We have now drilled 170-some drill holes that verify a resource in excess of 900 million tons that was never on the books before,” Oliver said.

He says a mine tapping into that resource could employ 400 people for decades to come.
Copper and nickel, and the associated precious metals, are used in everything from electric wires and computers, to catalytic converters and rechargeable batteries, so demand is going up all the time.

The combination of higher prices and improved technologies to recover the minerals is generating new excitement about a deposit that geologists have known about for a long time. Oliver discounts worries about polluted groundwater. He says the core samples are solid, nearly free of cracks, so it wouldn’t be easy for any polluted groundwater to travel through this ancient rock.

And, he says, the waste rock will contain so little sulfur that the kind of pollution that has occurred at other mines is unlikely.

“This is deemed below any threshold that would generate acid drainage,” Oliver says. “It just doesn’t have enough sulfur to do it.”

Until recently, a different company — Polymet — was the front-runner in the race for copper-nickel in Minnesota.

Polymet’s property is just south of the land Duluth Metals is exploring. The Minnesota DNR and the U.S. Army Corps of Engineers did a draft Environmental Impact Statement for the Polymet project, but the federal Environmental Protection Agency did a scathing review of the work, saying it was inadequate. It will take more than a year to re-do it.